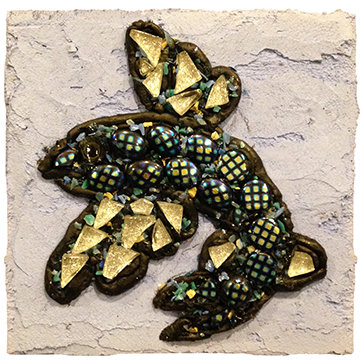 For My Barbados Hostess

These pieces were requested by my Barbados hostess. She wanted to bring some of the island’s loveliness into her home.  Both pieces used 4” x4” tile and the background is thinset. The flying fish is made out of beads and vitreous tile with Magic-Sculpt® as the adhesive.  The sailboat on the beach was made from stained glass, copper wire and a very important red bead. The water is murrini. Her comments, “Lovely— just what my home needed.” I can’t wait to see them framed! 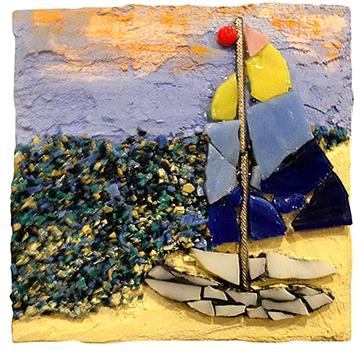 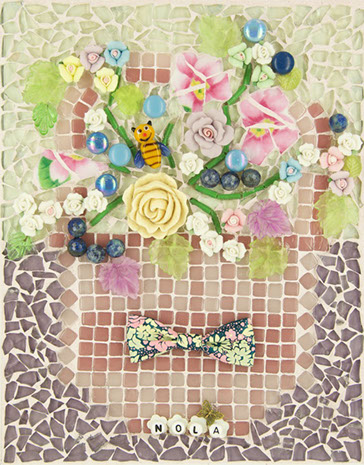 Nola’s Basket was made for a little girl’s bedroom (well, she is currently still a baby). The mother is a good friend that I work with and she wanted a mosaic like “Nantucket Basket.” This piece is made from scrapbook paper, tiles, porcelain flowers, beads, tempered glass and a fabric bow. The little butterfly by her name was from an old earring that had lost its mate.

My friend wanted to revitalize her great-grandmother’s gravy bowl. The vase is from the white part of the porcelain while the flowers are created from the floral pattern of the bowl. Other materials include turquoise beads, scrapbook paper and tempered glass.

"I had a piece of broken china that belonged to my great grandmother. Becki turned it into a wall plaque that has beauty and whimsey as well as being a wonderful piece of memorabilia." 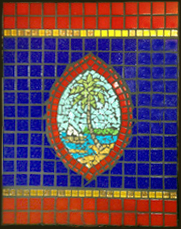 I was commissioned to create the Seal of Guam into a mosaic piece. The work consists of vitreous tile, scrapbook paper, and tempered glass. The most interesting part of the work was learning about the symbols depicted in the seal.

The shape of the seal is of a Chamorro sling stone used in warfare and hunting. The coconut tree, growing in infertile sand, symbolizes self-sustenance and determination to grow and survive in any condition. The bent tree trunk is for the people that have been tested by famine, natural calamities, genocide and foreign wars but who have continued to survive as a race.

The boat is a flying Proa — a seagoing craft built by the Chamorro people. The river channel, where fresh water interacts with the ocean, symbolizes a willingness to share the resources of the land. The land mass in the background demonstrate the Chamorro’s commitment to their homeland and environment (sea and land). The “Two Lovers’ Point” portrays the people’s faithful commitment to passing their proud heritage, culture, and language to the endless sea of future generations. (Seal of Guam, Wikipedia) 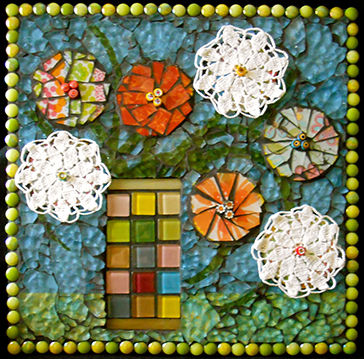 From John and Minnie’s Garden

What does one do with several hand-crocheted lace dollies? As the client’s grandparents were avid gardeners, I created a piece to highlight the dollies as lace flowers. Other items include vitreous tile, gemstones, scrapbook paper and tempered glass.